A Thank to all my open mic friends from Paul Pot

You can't talk about 140 characters in 140 characters. Were there that many people there? As Candy said, "It wasn't a school night."

To the musicians and audience let me say, "Thank you for the most wonderful show on this Wednesday's Thanksgiving Eve Open Mic." This was one of those stellar nights that makes me really enjoy what I do every Wednesday. This open mic has got to be one of the best shows around and it's such a shame that it has to be our little secret. I get to throw a party each week, be Ed Sullivan, and not have to pay for the beer. Thank you. Thank you. ...Did I say, "Thank you?" Can't be said enough.

I'm a bit hazy on the details, as I had to make sure that the show ran well (perhaps you noticed I may have been a tad intense all evening) and I was also drinking beer. I started the show in my usual spot of sacrificial lamb. Not too much blood was spilt and some folks seemed to enjoy it. Max and Sam followed. Nice job on the Chris Smither song there, Sam. We had to juggle the lineup a bit to accomodate the TV stars (more on that in a bit), so I am grateful to Guy and Molly for moving up in the list and pitching in to keep things rolling. A big thanks to Guy for playing bass where needed. He can just play a song on the fly so, if he's there, don't be afraid to ask him to join you. Lowdown Jesus did some great harmonies on short notice.

Eventually we got to our TV stars. TV stars? Well almost. For some reason, a TV station in Spain decided that one of the members of the Horrible String Band was the typical California dude and were filming a day in his life. A typical day in the life of a Horrible String Bander just happens to include playing at the Missouri Lounge Open Mic. I just put the microphones around them and they belted out their songs on banjo, violin, guitar, standup bass, and damned powerful vocals while the Spaniard filmed. It was incredible. Also captured on film were Girl George (Madrid is gonna just love "Fucking all the Sailors in Chinatown") and what we like to call the "Soundtrack in his Own Mind" sound of Ken on electric piano (one of those with the programmed rhythm sections) accompianied by Roger Brown on guitar and yours truly on kazoo. It was kinda like the blind following the blind. Some people can't see it, but Roger and I do.

Doggie Jomo did an amazing version of a song called "Dig a Hole in the Meadow". He said he heard it in Ireland. Poor Lulu does not fare well in that story. David Matela came on and wowed us with his guitar playing. There are a lot of guitar players using a loop box, but you can always tell that they are using one. With David, people are always asking, "How does he do that?" It's so seamless when he does. He takes you for a ride. Big Bill followed with a nice couple of songs with David on guitar.

After Bill we got into the lightning round of the show. This is the part where we are running out of time and everybody gets one song and (boy oh boy!) do they ever give us their best. Eric, let me start off by saying, "I love you, man." I listened to you play and, as much as I enjoyed it, I can't remember what you sang. (You did hear the "I love you , man" part, right?) Geoff was a little under the.... okay, okay, he was polluted, but played a series of vignettes in a new tuning without falling off the chair. Staggering genius? Greg had Mike Husser and Roger join him on a Buffalo Springfield Tune. Harlan, Philo and Mike boogied. And then there was Roger. Roger Brown gave us one of those performances where his voice gently soared and his guitar sang most beautifully. Say no more.

At the end Sarah, ex-manager of the Miz, led us in a round of "You Are My Sunshine" in remembrance of Missouri staffer, Jamoki, who left us all too early last week. I only knew him in passing, but I could see he was dear to his friends, who miss him greatly. A good soul that one. Good night, kind sir.

I'm sure I've left something and somebody out. There were a ton of people there and I bet that at least 140 of them were real characters!
Posted by Happy Clams at 12:45 AM No comments:

Lookout Project Runway; Clam Fashion is on the Horizon! 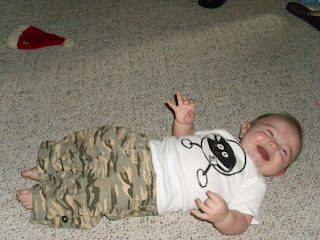 Our young model (and my nephew), Sage, shows off the new look that will soon be sweeping the Clamnation! By the time he's old enough to see us play, he'll be out of diapers and I'll be back in them (on stage, no doubt.)
Posted by Happy Clams at 8:49 AM No comments:

Thanks to those who came out to Chesters. Special thanks to those who requested we play songs they missed from the early part of the set. We didn't account for the two hours as well as we should have. We'll be there again on January 15th. We'll make it a birthday party.
Posted by Happy Clams at 8:20 AM No comments: 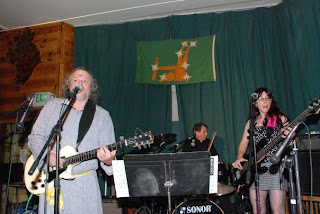 The Murder Ballads Bash on Halloween was just about the best one yet! We had so much fun playing our song "Death Becomes You" and our version of Wild Man Fisher's serial killer spectacular, "Jennifer Jones", where I killed Gail in the middle of the song. In it's 8th year, this show has become a Starry Plough classic that should not be missed next year. Incredible performances by Penelope Houston and the Birdboys, Luther Monday and the Magic Hammer, Loretta Lynch, The Bodice Rippers, the list goes on. 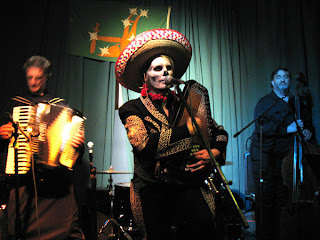 A shot of Penelope and the Birdboys (thanks Steve).....

And our hostess Val with her contagious smile.. 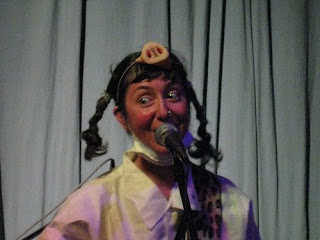 To see more pictures of the show by Michael Zelner, just click here