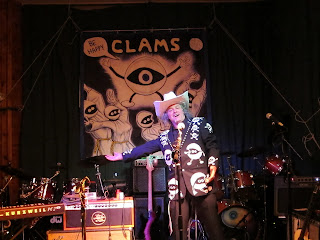 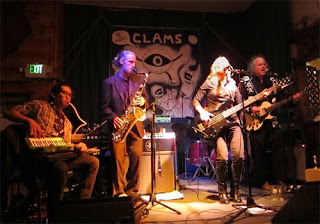 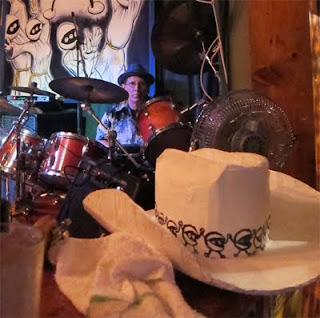 Epilog
One of the drawbacks of the eastbay music scene is the lack of places for a hungry musician to go after a show. Many times I have heard myself say, "Naw, the only place open around here is Dennys." I've heard there is an all night sushi place, but I can never remember it when I need it. So there I was at the end of the show, my bandmates all gone home, finding myself alone and hungry. I stopped by Safeway and picked up a pre-made roast beef sandwich and some macaroni salad. When I woke up the next morning, I looked at the labels. My simple roast-beef and cheddar sandwich contained the following: unbleached enriched flour (wheat flour, malted barley flour, niacin, iron (ferrous sulfate), thiamin, mononitrate, riboflavin (folic acid), water, sugar, nonfat milk, yeast, butter (made from milk and/or cream, salt and annatto), potato flakes, contains 2% or less of the following: wheat gluten, sea salt, soybean oil, sodium stearoyl lactylate, soy flour, mono and diglycerides, calcium sulfate, cultured wheat, (milk), and soy lecithin, Then we go on to beef, water, salt, potassium lactate, sugar, sodium phosphate, sodium diacetate, sodium ethorbate, garlic powder, extracts of spices coated with: (coriander, black pepper, caramel color, garlic powder, natural smokeflavor, extractives of spices), sliced tomatoes, fresh pasturized milk, cheese cultures, salt, enzymes, annatto (color), and lettuce. *** contains soy and milk ****. Thank god for the natural smoke flavor and what is meant by .... (milk)? We won't even go into what it said on the plastic lid from the macaroni salad. Dennys doesn't sound so bad after all, does it Mr. Pollan?
Posted by Happy Clams at 3:08 PM No comments: