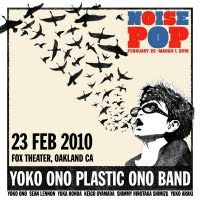 Don't worry. Yoko rocks! Son Sean was kinda dorky as bandleader (probably gets that from his dad), but is a fine guitar player, and it was cute how he kept calling her Mom on stage. The "new" Plastic Ono Band (without all the big names from the Brooklyn show) had good drive for the spacey, sweet, and funky numbers.
I liked the bio-film at the beginning. Maybe because it brought back a lot of fond memories, like seeing the "War is Over" billboard at Times Square when I was a teenager. The film showcased her art which was not part of the show, but is part of the whole Yoko thing. Nice to see a shot of her playing with Ornette Coleman. I made it to see the opening act, Deerhoof. They weren't my cup of tea, but it appears that a lot of the people at the show were drinking it in. I totally loved the Yoko show. She did a few songs I didn't know. At least one was from the new CD. There was a lot of incredible warbling. "Death of Samantha" was moving; gotta love those "Chicky babys". Sean backed her up on piano and guitar on some sad and soft songs that she sang beautifully in that childlike, Yoko fashion. Walking on Thin Ice was great. I coulda used more screaming on "Mind Train" but the "Lub Dubs" are always lotsa fun for me. (The "Fly" album is one of my favorites.) The encore of "Fly" with the film (excerpted to show just the naughty bits) was incredible. Sean played some amazing spacey art guitar featuring a call and response with his mom. Though Yoko had it going for "Don't worry Kyoko", the combination of the two bands was a little lackluster for what the three chord song required. It wasn't a good setup for "Give Peace a Chance", updated for today's news but a little slow (maybe because the people who joined her had to read the new lyrics as they sang them.) You gotta hand it to Yoko. She's a wonderful weirdo who remains a positive force without any negativity. Seventy-seven and still going strong. All in all, I had a blast.
Everybody found a little flashlight on their chair for the onochord (1,2,3 flashes for "I love you").
I like my flashlight.
Posted by Happy Clams at 4:25 PM No comments: