Another dose of murder, death, and despair for 2010 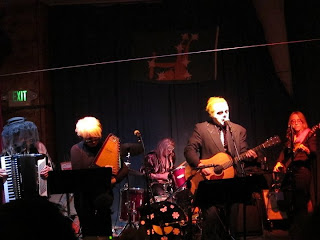 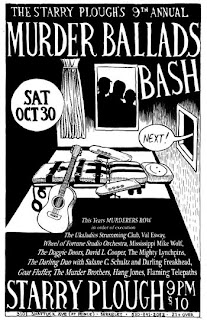 vanni (accordian in mourning), the Happy Clams sneaked into the 9th Annual Murder Ballads Bash as the Wheel of Fortune Studio Orchestra. The name comes from Paul Pot's misconception that there was actually a studio band for the game show instead of a tape.

Our new song, "Nothing I Can Say", was debuted by the orchestra. The song had 7 alternative lyrics (beaten, bludgeoned, drowned, shot, stabbed, strangled, and suffocated) for the death scene. The verse used at the show was determined by having a volunteer spin a wheel of misfortune at the show. Between our two songs we played one round of the game, where the audience guessed the dead singer (Johnny Cash), and then tore into a rendition of Delia's Gone, featuring the Murder Ballads impresario, Val Esway, on triangle. Every good orchestra has a triangl

It was an evening of amazing performances featuring the Ukaladies, Val Esway, us, Mississippi Mike Wolf, the Doggie Doors, David C Cooper, the Mighty Lynchpins, the Darling Duo, Goat Fluffer, the Murder Brothers, Hang Jones, and the Flying Telepaths.

Posted by Happy Clams at 4:55 PM No comments: