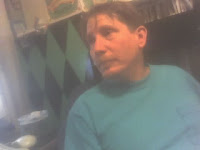 In honor of Michael Jackson, Rawbird had himself surgically altered to be an exact copy Melanie DeGiovanni for our performance at Lanesplitter's Anniversary Party. The surgery was so successful that he completely fooled Mel's husband, Andy, who played horns with the Clams at the show. Their children, who were in the audience, knew something was wrong, but were unable to articulate their concerns with pizza in their mouths. After the show, Rawbird went back under the scalpel and was his old self at rehearsal the next evening.

Saw the Zeros last night. Awesome! If you missed it, they are playing again at Gilman St tonight (6/27).
Posted by Happy Clams at 10:49 AM No comments:

The Happy Clams played a solstice celebration at the Albany Bulb with the Cavepainters, Strange Angel and the Ravines. It was a great day where we discovered that some clams don't go bad in the sun. There was great fun and good cheer.

Rawbird - banjo
Gail - bass and vocals
Guy Michel - guest on second guitar
Bongo Barry - what else? bongos
Posted by Happy Clams at 12:16 AM No comments:

Well, it had to happen. We dropped off the KUSF 90.3 charts in SF. It was nice 6 week ride. If any of you had called in and requested the CD during that time, we are grateful. Keep it up. Maybe we'll get back on. -Paul
Posted by Happy Clams at 11:09 AM No comments: